Well it is that time of the year again to wish you the very best for a lovely Christmas!  We have purposefully kept things quite quiet in the Hotel this year for the Christmas time so we can do a big spring clean as well as check each cottage and room to be ready for any changes, repairs, maintenance and improvements for the coming season.  Daughter Esme is going to hold her annual big dinner for a host of her friends as usual – she organises the cooking of everything (with some of them helping!) and they all contribute towards the cost.  I think last year she served sixty-two meals so no mean feat and rather her than I!  We help with the carving and serving usually.

We welcome Hazel and Amy to the staff here too and they have been great already in getting to grips with everything.  We are doing far fewer evening meals, simply because that ‘is the way it is’ and to some extent, whilst it is a shame as we know we can do great fare in a superb setting, spasmodic servings can be very disruptive so we may well only do group service and parties in the future – we are yet to decide!

However, the bookings for the cottages and Hotel rooms are still trundling along well for next year so we hope that you will consider us and come and visit – as well as see our menagerie of beasts! 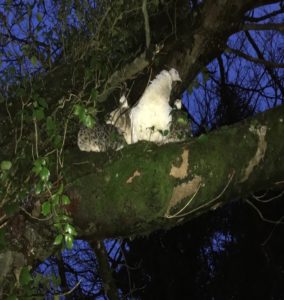 The four peachicks have all survived and we have just let them out of their run to spread their wings a little and they have decided the ignominy of going in a small house at night is no longer for them.  So they flit up to a nearby tree branch, open to the elements but with Dad and auntie close-by too.  ‘Mum’ has been a brilliant and attentive mother too and in the picture you can see that she still takes great care of her babies.  Yes, one is standing on top of her brother!  They can still be susceptible to foxes so we are still rather wary – it is too late if one of the babies trapped itself in a confined area and that would be that.  The emus are keeping well and occasionally decide to spend the night in their house but more often than not, prefer to sleep under the stars – and the rain and howling gales too… we haven’t seen any foxes since we have had them but whether their deterrent qualities work or it is sheer coincidence we don’t know – and don’t want to find-out the hard way either.  The ‘stupidest’ birds by far are the five turkeys.  I can see why someone somewhere started to eat them….  Sheer frustration… every night going in their house is like a brand-new experience…. Whereas the little chickens have already put themselves to bed, rounded-up usually by our sole Guinea fowl when it’s bedtime.  The geese and ducks have to be enticed or ‘told’ but at least they do go in – well, aside from one Muscovy Drake who has never gone in at all and won’t ever join them.  He does stay inside the main netted-run and I should hope he is savvy enough to go on the pond or flit-up onto something higher if a fox did try to snaffle him.  And of course, as spring nears, the gander goes in the house and if you are not quick enough he has turned around and is reaching-out to bite whatever part of you is vulnerable… he’s the most aggressive gander I have ever known and I have been around geese all my life!  I can sort him out though…. Well, most of the time but I have to keep my wits about me!

Next year, on 16 September is the celebration of The Mayflower’s sailing and arrival in America.  Not many realise that there was more than one ship and on one, ‘The Supply’ which sailed from Bristol three weeks later, was a relative of mine who looked after Jamestown for which he was awarded land and his descendants live in the area to this day.  It would seem fitting if the North Devon connections were celebrated somehow next year too (as there are plenty I am sure) and we had the ill-fated Roanoke Project which was sent by Sir Richard Grenville in 1587 and upon which ship he and therefore I, had another relative, Henry Mylton.  Sir Walter Raleigh and Sir Francis Drake were connected to that expedition too.

For some, especially Americans perhaps, the opportunity of staying in a Domesday-listed Manor House, owned and run by a relative of one of the earliest settlers in America, might just resonate and I should be happy to fill-in more of the history for any guests here as I know it too.  That said, the whole tale of the Roanoke settlement is fascinating anyway (Google it!) and a film remake would be a great idea for someone to commission.  We could even be part of the set as our vista is not blighted by too many telegraph poles and modern erections!

THE FASTEST WIFI IN THE WEST?

We have the fastest holiday accommodation WiFi in the North Devon and Exmoor area!   At considerable cost we upgraded to go fully fibre-optic for better business effectiveness, staff efficiency and responsiveness.   No, this is not ‘just’ a wired connection to the nearest roadside box but a super, unique fibre optic link direct to the local Exchange with Ubiquity ‘Enterprise Grade’ equipment.

The Hotel and cottages had slower speeds than two-thirds of the Country but now faster speeds than 99%!  We have always believed in free WiFi for guests – whether residents or the cream tea or coffee visitor.  In fact it makes me angry when we travel to find complicated access processes or extra fees.  People on holiday need reliable and speedy internet.  When I am away, I need to work and many others do too.  For entertainment – or for their children, it is important and so there are no access restrictions on broadband width for guests either as they will experience everywhere else!

This is not only for tourists but we are seeing more business guests too.  The WiFi and mobile signals nearby are pretty poor and not reliable so the frustration some face when they do their work won’t be experienced here.  We are also open for conference facilities too so imagine streaming presentations – no interruptions or slow speeds – plus reliability and all of your delegates having great, free WiFi.   The facility is encouraging more guests (even out of season for those escaping for work projects to enjoy the surroundings too) but more morning coffees and afternoon teas as these guests have direct free access too.

So come and stay a night and see.  Average Broadband download speeds in the UK are 46.2mbps and upload speeds of 6.2mbps. Trimstone’s speed is 300Mbps download and 30mbps upload.  Our internet means you can download an Ultra HD film (70GB) in 31 minutes compared to 3.24 hours on the average speed.

Have a lovely restful time over Christmas and here’s to a great New Year too – whatever your politics, some things will be well and truly settled with a working majority in The House of Commons at last and so plans can again be starting to be made by all of us with some sense of ‘certainty’; we don’t know what the terms of leaving the EU will be but we do know that there is clarity in Westminster anyway.

Any cookies that may not be particularly necessary for the website to function and is used specifically to collect user personal data via analytics, ads, other embedded contents are termed as non-necessary cookies. It is mandatory to procure user consent prior to running these cookies on your website.